The Game of Good and Evil

The political and personal morality of the West, especially in the United States, is utterly schizophrenic. It is a monstrous combination of uncompromising idealism and unscrupulous gangsterism, and thus devoid of the humor and humaneness which enables confessed rascals to sit down together and work out reasonable deals. No one can be moral without coming to a working arrangement between the angel in himself and the devil in himself, between his rose above and his manure below….

Does it really take any considerable time or effort just to understand that you depend on enemies and outsiders to define yourself, and that without some opposition you would be lost? To see this is to acquire, almost instantly, the virtue of humor, and humor and self-righteousness are mutually exclusive. Humor is the twinkle in the eye of a just judge, who knows that his is also the felon in the dock. How could he be sitting there in stately judgment, being addressed as “Your Honor” or “Mi Lud,” without those poor bastards being dragged before him day after day? It does not undermine his work and his function to recognize this. He plays the role of judge all the better for realizing that on the next turn of the Wheel of Fortune he may be the accused, and that if all the truth were known, he would be standing there now.

If this is cynicism, it is at least loving cynicism—an attitude and an atmosphere that cools off human conflicts more effectively than any amount of physical or moral violence. For it recognizes that the real goodness of human nature is its peculiar balance of love and selfishness, reason and passion, spirituality and sensuality, mysticism and materialism, in which the positive pole has always a slight edge over the negative. Thus when the two poles, good and bad, forget their interdepedence and try to obliterate each other, man becomes subhuman—the implacable crusader or the cold, sadistic thug.

—The Book: On the Taboo Against Knowing Who You Are, 1966

From the first bars, the music is insistent, excited, and joyous. There’s a seriousness underlying the joy, the kind that lets you know that this happiness is important. And there’s a hint of sadness underneath it, as there always is with the deepest joys, like the sadness you feel in seeing your daughter married or your son graduate from college.

The words are fast, almost staccato. The chords are simple, and they’re augmented with a light piano figure whose notes are like the sparkle of sun on a clear stream.

When you’re in extremis—when you know to your core that your life is about to change in some way that is beyond what you can know and that is utterly beyond your control—when you stand helpless before forces to which you do not figure in the slightest—when you know you’re about to die, do your senses merge into the seamless garment you wore as an infant, touch becoming smell, sound becoming color, pain and pleasure just labels for the same overwhelming sensation?

the crowds grow denser by the second
as we near the center of the town
and they dig a trench right in the main square, right there
and they pick me up and throw me down

This is what I think of when I think of small towns. Not the warm, hearthlike embrace of extended family, but the judgment and condemnation of whoever is different. There is an evil in human nature that larger communities help relieve. Not completely, by any means, but significantly. Yes, our cities have their back rooms and secret prisons. But every small town used to feature the stocks, the pillory, the gallows, the stake. Many towns today would like them back.

I have a grievance against God. Not that he made us flawed, not even that he permits evil. It’s that he could have told us not to be cruel. Not implicitly, but directly. It only would have taken a few unambiguous words. Whosoever does such things to my children, even to those who have strayed or renounce me, does so also to me. Think of the millions who would have lived to write, to bear children, and to love instead of dying by axe, rack, or flame.

Knowing what you want

Letters of Note includes this message from the young Samuel Barber to his mother in 1919:

NOTICE to Mother and nobody else

Dear Mother: I have written this to tell you my worrying secret. Now don’t cry when you read it because it is neither yours nor my fault. I suppose I will have to tell it now without any nonsense. To begin with I was not meant to be an athlet [sic]. I was meant to be a composer, and will be I’m sure. I’ll ask you one more thing.—Don’t ask me to try to forget this unpleasant thing and go play football.—Please—Sometimes I’ve been worrying about this so much that it makes me mad (not very),

Samuel Barber went on to become one of the foremost composers of the twentieth century, twice being awarded the Pulitzer Prize for Music. When he wrote this letter, he was nine years old. 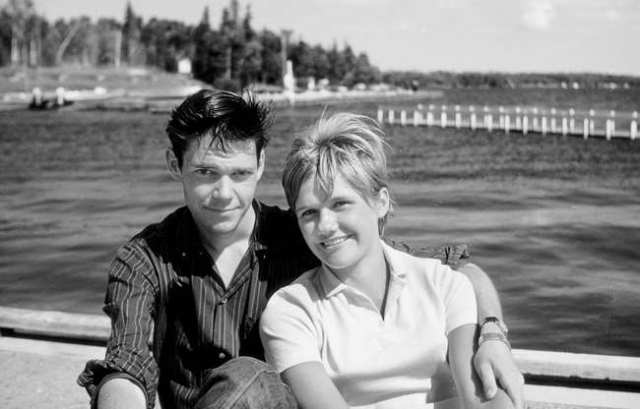 But I’m only sixteen years younger than this guy:

The Opposite of Love

So is hate the opposite of love after all? No, because sometimes hate is just one aspect of a passionate emotional involvement that may be hate one day and love the next. It’s only the intensity that stays constant.

Maybe different kinds of love have different opposites. The English word love is pressed into service to fit all kinds of emotions, attitudes, and actions that might usefully have their own words.

There’s the intensely sexual, emotionally idealizing love of a young person for another. There’s the still sexual, but wiser and deeper love of an older adult for a life partner. There’s the appreciative love one has for a friend one admires. There’s the generous, sometimes altruistic love one has for needy strangers. There’s mother-love and father-love and the love of child for parent—filial love, both immature and mature. And these are just the loves one has for people. There are also the real loves one can have for animals, for beauty, for nature, and for abstractions such as flag, party, and country.

These loves are so different, surely they must all have their own opposites.

In a one-to-one relationship with another person, the killers of love are disappointment and resentment. Disappointment is like drops of water that can eventually eat away a stone. Resentment is more like lightning, striking and scorching, sometimes cleaving in two.

But neither disappointment nor resentment are the opposite of love. Love has no opposite. Because there is no force as negative as the force of love is positive. Love can be eroded and even destroyed, but it can’t be defeated by something more powerful. Because no such thing exists.

Hurrah for cynicism! A toast to self-loathing!

What, you think I’m against these things?

To be sure, a cheap cynicism is an ugly thing: the cynicism of those who can’t handle the responsibility to act in an ethical way. The cynicism of business and government—of the manipulator, the cheater, and the me-firster—is not what I’m talking about.

But the cynicism of the broken-hearted idealist, the ethical loser, the romantic realist: that’s my kind of cynicism.

Look at Rick in Casablanca. Torn from the love of his life by the war, he fled to a remote political no-man’s land, where he runs a bar and proclaims that he “sticks his neck out for nobody.” His best friend, to the extent he has any friends, is a corrupt police captain.

The police captain is what we’d now call a sexual predator. A young couple from Bulgaria has made it to Casablanca, but they can’t finish their escape without an exit visa, and they can’t afford the fee. The captain lets the refugee wife know—she’s seventeen, he’s fiftyish—that exit visas might be provided if she sleeps with him. She goes to Rick for advice. She asks him what kind of man the captain is.

“Like other men, only more so,” Rick tells her: a classically cynical answer. He tells her to go back to Bulgaria. But in the next scene, he rigs the roulette wheel in his bar so her husband wins and has the money for the visas. It doesn’t endear him to the captain.

It’s a purely sentimental act. Rick gets no reward for saving the Bulgarians. I don’t think he even feels proud of it. He’s just acting according to his true character. Although his heart doesn’t bleed (except for his lost love), neither can he ignore a true innocent who asks for his help.

Rick is a cynical man saved by sentimentality, and Casablanca is a sentimental movie redeemed by cynicism. It’s the movie’s bleak vision that makes it bearable. Ilsa Laszlo’s do-gooder husband is so bland he’s almost not there. Even the resident prostitute—the one who sings the Marseillaise—is more memorable, and she’s only on screen for a minute. More pleasure comes from watching those icons of petty evil, Peter Lorre and Sydney Greenstreet.

There are less intentional darknesses in the film that I find fascinating, although not pleasant. One is the film’s own attitude toward the captain’s predation, which is that it’s a moral failing but not a very culpable one. (All is forgiven when he betrays his German masters and throws in with Rick at the end.) One is Ilsa’s display of the casual racism of the time by referring to Sam the piano man, 29 years her senior, as “the boy at the piano.” One is the glowering countenance of the Bulgarian boy-husband, who I can tell at a glance is far too dark and moody a man for the good of his poor young wife. (I can only imagine the bloody violence if she had slept with the captain—to save both their lives—and he found out.)

But as with most Humphrey Bogart pictures, the primary fascination of the picture is Rick. Rick is a misanthrope. He thinks the worst of people, including himself, and he idealizes no one. He drinks to excess and turns a blind eye to all sorts of crime in his establishment. But he’s a good man. It’s because he was happy once, and good, and good still comes out of him, involuntarily, like an embarrassing tic. He can’t help it. He was broken by disappointment, and that’s what made him a cynic. But the Bulgarian girl was right to trust him. Somehow she sensed his character.

I admire our grandparents’ conception of virtue as independent of self-esteem. Whether a man liked himself or not was his own business. It was his character and his actions that counted.

Even in the midst of self-loathing, there’s a pride that can keep you afloat, and the pride comes from knowing that, when it counts, you act in accordance with your character, your values. If you know that, no one else’s judgment matters.

From a notebook I kept in the summer of 2010. I was speaking of developing my writing, but there’s a larger application to growth in general.

“It is my better self I am trying to release, perhaps my best self, but only my weak self, my everyday self, can help it emerge. And so my talentless, flawed persona, the me I’ve constructed to get along with others, must find the strength and resources to bring my stronger, better self into the world.”

I am lost, and my driver is not much help. Would you kindly direct me to the nearest hay store?